skip to main | skip to sidebar

I thought this was a great opportunity to share some landscapes that I've visited.  Each week I'll try to post a landscape design project.  Some you've seen maybe some you haven't.  The idea is to provide a visitor's perspective and a designer's critique. 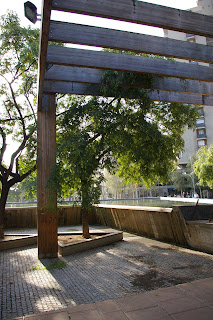 We arrived to this part of the project first which is several blocks away.  It was a neighborhood pocket park that seemed to have the cubist concept as the central park through its layout and details.  The park's maintenance and programming seemed to be lacking.  Though I'm not sure how much programming is really needed for a small park.  It did however, seem like a nice landmark for the neighborhood; a place to meet someone before going to the cafe or seniors to come and play cards with friends.  There was a lot of hardscape however, most Europeans don't necessarily associate hardscape as negative as much as Americans do. 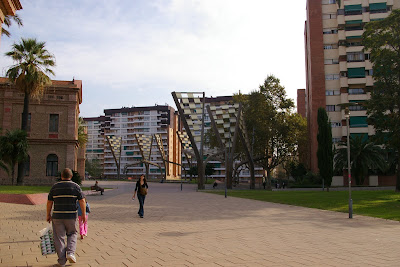 We arrived to the larger central park via metro (one stop away) and began to walk into the park.  The park was surrounded by high density housing that had been existing prior to the park being designed and built.

All of Barcelona's parks seem to have really fun playgrounds.  This was no exception. 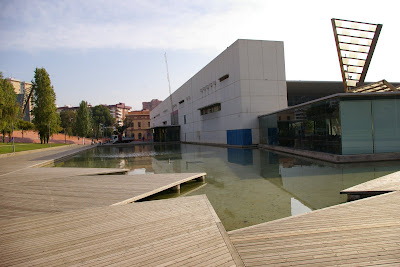 This was the centralized building of the park which appeared to have a restaurant and maybe some civic functions.  It wasn't open this early in the morning. 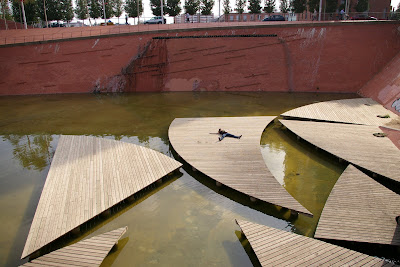 The fountains weren't working (it seems they hardly do) but the space below the pedestrian bridge continued with the cubist concept.  The space was fun to jump around and just relax for a while. 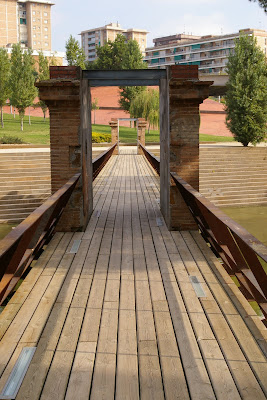 Here is the pedestrian bridge that serve as one of the several paths connecting to the park.  Great details here. 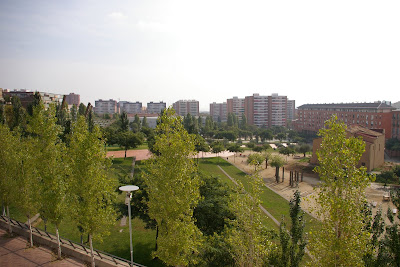 We made it to the top realizing that we ascended easily 100 feet vertical.  However, the parks triangle patterns of paths bring you up through the park gradually.  This park did have several open spaces for multi-use programming and seemed to intersect perfectly into the existing neighborhood.  Though there seemed to be some maintenance issues or construction flaws, the project seems to be successful for this area.  To have this much open space and connectivity to the existing neighborhood it's wonder why it won the IULA award in 2007 and beat out high profile projects like:

As Southern California is recovering from a mini heatwave this past weekend it reminded me of all those urban swimming pools that have been popping up across Europe over the past few years.  They remind me in a way of the swimming holes in the abandoned mining quarries that are throughout the East Coast in the Appalachian Mountains.  Except these are so much more elegant, designed and just flat out cooler than swimming in a giant hole that has some rusting tractors at the bottom.  Take a look at some of these "swimming holes" via Architonic. Dublin public swimming concepts by JDS Architects
Images via architonic
Now what if you want all the perks of swimming in a natural or pseudo-natural water but have an old boring concrete pool in your backyard?  Well there is still hope for you to convert your pool into a living biological pond that's safe for you and easy on the environment.  Check out what some designers are doing in Australia and the UK.  I'm actually surprised this hasn't caught on fast in Southern California, the land of tract pools. 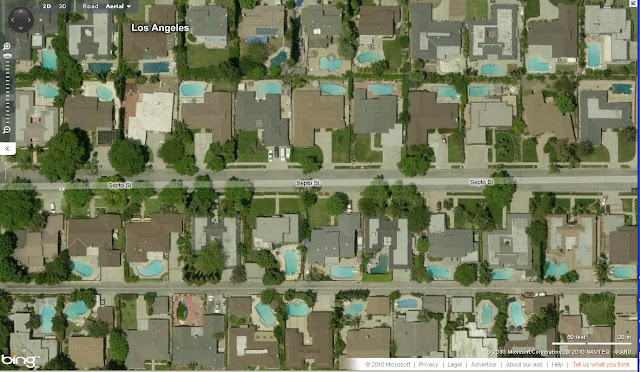 San Fernando Valley, Los Angeles CA via bing maps
I remember when these natural pools first were coming out several years ago the designs weren't too impressive.  However the technology and the design concepts seem to be progressing and there are some really great natural pools out there. 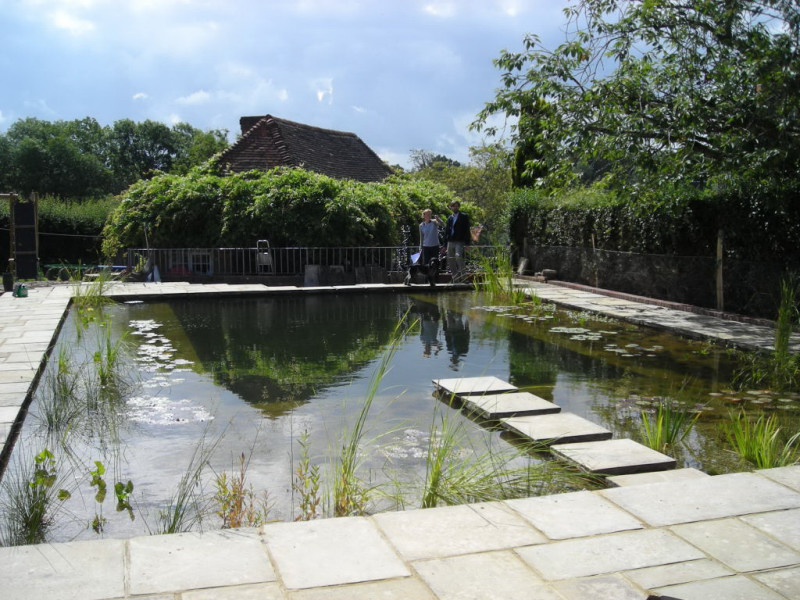 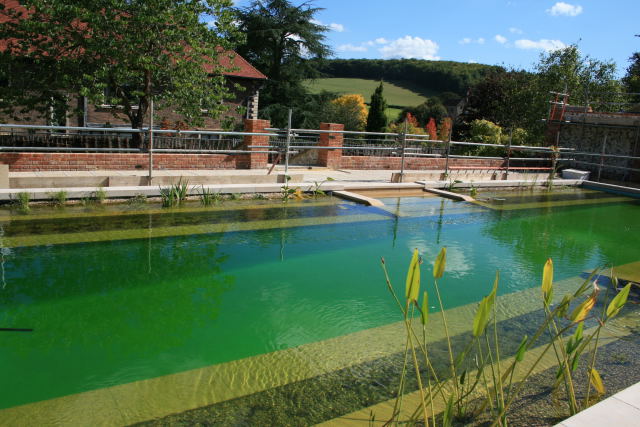 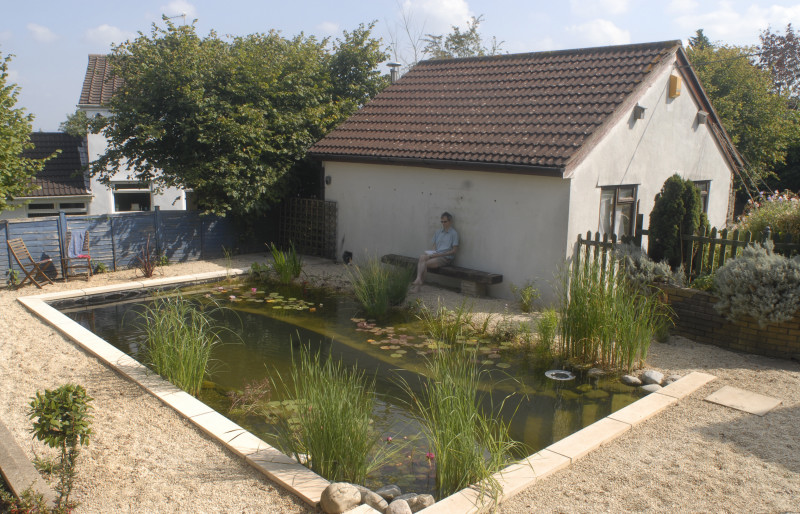 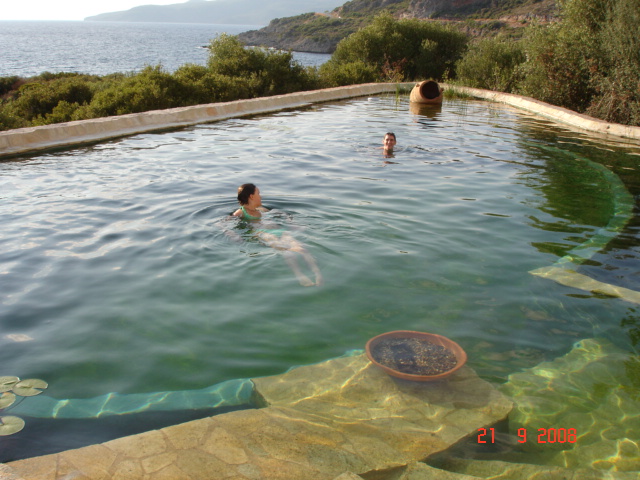 natural pools via Garden Art-Australia
In general these natural pools provide all the great amenities of a regular pool without having to use chlorine to treat the water.  Chlorine is a toxic chemical and has been found to cause severe asthma in children as well as several other skin and health problems including breast cancer.  It might be a little harder diving for those rings at the bottom of the pool but it might just be worth it.  Conventional pools vs. natural pools are similar in construction cost while the maintenance on a natural pool is much lower.  Also, natural pools heat themselves due to the biological regeneration zone that acts as a passive solar collector.
Posted by Adam Trujillo at 3:25 PM 4 comments:

Sustainability is such a blah word these days. It's used by almost every sector of business. Unfortunately, it has lost its meaning and its value to most people in the design field however, it is still something new to some design professionals. I began to look at what sustainability means as a landscape architect in regards to the types of materials we have to choose from that are considered "sustainable". Through some research I found Bill Lawson's framework for the Measure of Environmental Impacts of Building materials on Rainforest Information Centre. Australia uses a system called BMAS (Building Material Assessment System) that gives a point ranking to building materials. It would be really helpful if the U.S. started a material assessment system rather than using the USGBC's LEED points system. But that's another topic for another day. But since we don't have this system set up here for us we as designers should start looking at materials in the way that Lawson describes:

a) The damage to the environment during mining or harvesting of the basic material.
b) How much damage in relation to the quantity of materials (what else is disturbed or damaged?).
c) The source, size, or renewability of the basic material.
d) The recycle content.
e) Waste residue, solid or liquid, in production.
f) The air pollution due to manufacture and production.
g) The embodied energy
h) The energy consumed during transportation to site of usage.
i) The energy consumed on-site for erection or assembling.
j) The on-site waste and packaging.
k) The maintenance required during the life-cycle.
l) The environmental impact during the life-cycle (i.e, toxic emissions).
m) The energy and effects associated with demolition/disposal at the end of the life-cycle.
n) The recyclability of the demolished/dissembled material. 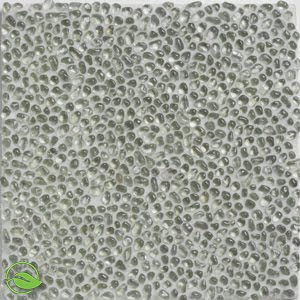 Glass is usually pretty energy intensive. But this tumbled glass tile from Modwalls is a great solution to not having to re-fire the recycled glass in the kiln. 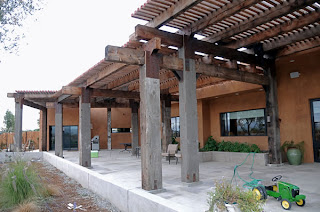 Recycled lumber is probably one of the best sustainable solutions for using wood on a project. Crossroads Recycled Lumber specializes in recycled lumber construction and their projects seem to show it. They have an almost endless gallery of recycled and reclaimed wood projects.
Locally quarried natural stone has been on the topic of discussion as to whether it is sustainable or not.
So when taking a deeper look into stone resources in California there were limited options but one Granite Quarry in Clovis, CA that produces black and grey granite. I'm awaiting some samples as I type. Wish I had some to post. Though the water feature at the US Federal Courthouse in Fresno, CA was designed using granite from Clovis, CA.
Here are some other paving alternatives. I don't believe that these products are one size fits all solution. I think that every project is unique considering the design intent as well as budget and client. 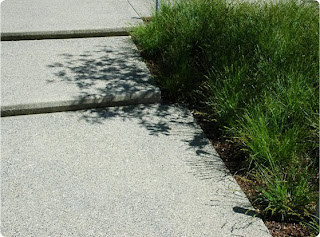 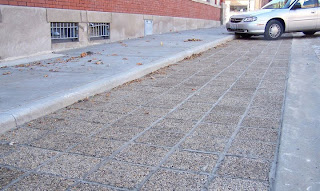 Permapave are a porous paver that are grouted in a polymer concrete set on top of a gravel base.  These pavers act as a filter that prevent runoff contaminants from entering the storm drains and help recharge local groundwater. 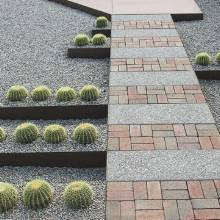 Concrete paving companies have been coming out with several permeable pavers that allow the water to infiltrate between the joints of the pavers. The come in almost any earth tone color imaginable and can be patterned in several different styles. 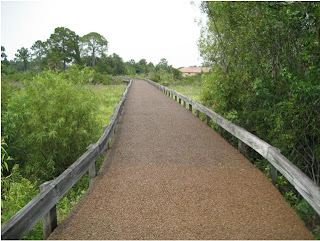 Flexi pave is a porous paving that is a great substitute for asphalt paving.  It uses recycled products and comes in several colors.  I would recommend it for light traffic areas and not parking lots because it tends to loosen with heavy automobile traffic. 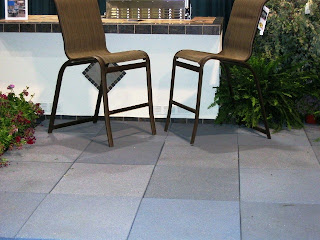 Rubber sidewalks are another concrete substitute that many cities have started to use for paths along street trees.  They are a recycled composite paver that allows tree roots to grow underneath them with out having to destroy and re-pour new concrete on city sidewalks.

Through my little bit of research I've learned that the practice of sustainability really comes from the designer taking the time to investigate the products available and determine how "sustainable" they really are.  From there we can start to understand the materials such as their benefits and limitations. After that, we can begin to get creative!
Posted by Adam Trujillo at 9:29 PM 2 comments:

Adam Trujillo
Landscape Architecture creates landscapes that evolve and change. Let's change it into something good.